Huntington’s Disease (HD) is referred to as the most curable incurable brain disorder. Yet, advocates, families, researchers, carers, and the medical community in the world of HD work tirelessly for decades towards a visibility exercise to do something to shift the stigma, and boost awareness. It finally happened this summer. On the 18th May this year, the world watched as the biggest ever global gathering of the HD community was beamed live from the Sala Nervi in Vatican City, in the presence of His Holiness, Pope Francis. HD families from Ireland, along with clinicians and researchers who had made the trip, joined the rest of the world in solidarity and awareness raising for this rare neurological condition that binds them together. The first of it’s kind. 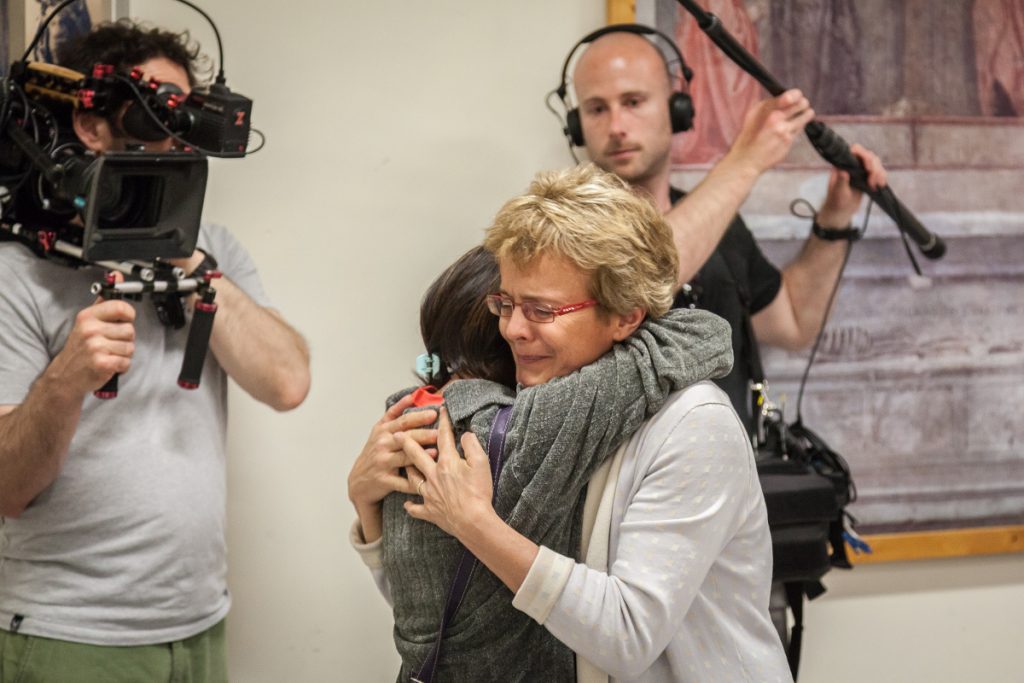 HD is a rare, hereditary neurodegenerative condition. Symptoms include movement, mood and cognitive disturbances, which in the majority of cases appear in a person’s mid-adult life – between 30 and 50 years of age.  Approximately 5-10% of people have symptom onset before the age of 20 (Juvenile HD) and 10% have onset after age 60. The symptoms of HD may vary in severity, age of onset and rate of progression from individual to individual and between members of the same family.  There are currently no therapies that effectively treat the underlying causes of HD. Described as the most curable, incurable disease, the stigma still attached to the condition means it’s been kept in the shadows, slowing progress towards a cure. People may have heard of HD as legendary musician, Woody Guthrie suffered from the condition but decades on the general public tend to know very little about this devastating condition.

The gathering in Rome, was called “HDdennomore”, a play on HD, the abbreviation for HD, and the word ‘hidden’. Owing to generations of stigma, fear and denial many HD families keep out of the system, out of sight, away from those who might persecute or judge them. Originally, the event was meant to thank the devout Catholic communities in South America that had helped unlock the gene for HD over 30 years ago, all of whom live in unimaginable poverty. What began as a thank you to these communities, evolved into the largest recognition of the condition in history, so benefiting the near million HD sufferers worldwide.

While HD families were hosted at the Vatican by Pope Francis, this was not a religious event, it was a human event about hope and recognition. As the first Pope to ever utter the words “Huntingtons disease”, Francis spoke of the need for a “commitment and not a slogan” to help these families. Pope Francis’s profile has given HD a platform it’s never had before – alongside the live stream by the Vatican TV station, the event was also covered by CNN, Reuters, Associated Press, RTE, The Observer, The Irish Times and The Journal.ie, amongst others and generated over 700 news and media articles worldwide.

Pope Francis gave a message of solidarity and hope to people with HD, their families, researchers and clinicians at the historic HDdennomore HD Papal Audience in Roma on May 18th 2017. “We are here because we want to say to ourselves and all the world HIDDEN No MORE”.  Mary, an Irish family member, described the event. “It was an incredibly moving and overwhelming experience to actually meet Pope Francis and shake his hand. His kindness and compassion were shining through…It was also wonderful and very humbling to meet other HD families, especially those from South America. Overall it was an experience we will never forget”

“Pope Francis has brought hope to HD families around the world. Being part of this global gathering and hearing Pope Francis encourage researchers, clinicians and families to continue to work together has strengthened my sense of belonging to the global HD community. ” Anne, HD family member.

Anne also added that Irish HD families are eager for the opportunity to contribute to research and hope that this coming together of families and researchers and clinicians might start that particular ball rolling.

The ‘hiddenness’ of HD has held back research for therapies and insight for clinical care for those who are working towards alleviating the burdens of HD. This visibility also brought some of the greatest scientific brains involved in Huntington’s research to Rome, and on a sunny terrace in the hotel Ciccerone after the event, they enjoyed the opportunity to get to know each other in an informal setting, discuss their work and plan new potential collaborations.

Dr. Niall Pender, Principal Clinical Neuropsychologist at Beaumont hospital, who was present in Rome, had this to say about the event:

“The HDdennomore campaign has been a landmark development for the awareness and understanding of HD. The disease has always been concealed by stigma which has stifled developments in research and treatment in all but a few specialist centres.  In Ireland this has resulted in a situation where we have no national centre for the care/treatment of Huntington’s patients and no active clinical trials.  We hope that HDdennomore will provide a vehicle for patients, charities and professionals to communicate about this dreadful and over-looked disease which will , in turn, enable us to begin to work our way towards sustainable treatments and eventually a cure.”

Enroll HD, an international observational study for HD families, is up and running in Beaumont, finally giving Irish families an involvement in the international Huntington’s research world, but care, resources and facilities have a long way to go in this country before they can be considered even adequate for those suffering.

Our near neighbours in the UK are miles ahead with HD specific care and access to trials. Dr. Ed Wild of UCL, a leading Huntington’s researcher who also runs the popular HDbuzz website had this to say on the day, “HDdennomore is a huge occasion for the HD community and for people with rare and genetic diseases throughout the world”.

Lauren Byrne, BSc MRes,  said “I really never expected to feel as overwhelmed and moved as I was by the experience that was the HDdennmore event in Rome. As a HD family member and a HD researcher myself, I felt doubly blessed to be there. Being surrounded by so many people from the global Huntington’s community was truly special particularly as members of HD families often feel alone in their struggles. It also gave me an opportunity to meet other researchers and clinicians that I may otherwise never have been face to face with.”

As an hereditary condition, each child of a HD parent has a 50/50 chance of inheriting the disease. These odds are enough to deter people from testing for the condition resulting in many people living in ignorance of their condition or pure denial. This under-reporting and “hiddenness” holds back important research both for treatments and for care of those living with the condition.

Further, as a rare condition, awareness and engagement can be tricky but as more is known about HD than any of the other neurodegenerative conditions, breakthroughs in it, mean new avenues of hope for the other neuros.

According to the Huntingtons Disease Association of Ireland, Ireland urgently needs to start meeting some of the multiple unmet needs of families; dedicated HD clinics and specialist multi disciplinary services to improve standards of care and bring us into line with other European countries.

To the future: 3 Irish film-makers have been involved in the project from it’s infancy and are part of a working group of just 14 people who put the event together including Sen Elena Cattanneo, Ignacio Munoz (CHDI and Factor H) and Charles Sabine. The group are committed to rolling with the momentum of the event. In an Irish context a HDdennomore event is in the planning stages which we hope can involve President Michael D. Higgins (a patron of the HDAI) and who, possibly serendipitously, met with the Pope just 3 days after the HDdennomore event. The aim is to galvanise the Irish families, research and care communities around HD – ‘the most curable incurable brain disease’. With research never more exciting and this recent profile boost, families must be encouraged to engage, come out of the shadows of stigma and fear that surround them and truly be hidden no more.

These families and this cutting edge research needs engagement from Irish talent across disciplines for HD to truly be hidden no more.